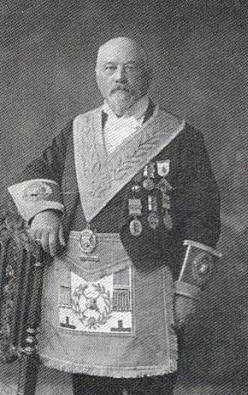 In addition to his services to the Doric Lodge, he became preceptor of the Victoria Park Lodge of Instruction, there to preside for 40 years. He was also Preceptor of the Woodgrange Lodge of Instruction from its inception, remaining in that office for 35 years. In recognition of his valuable services, both Lodges made him and Honorary Member.
Grand Lodge recognized his services to Freemasonry by conferring on him the Honour of A.G.Purs. in 1916.

Supreme Grand Chapter similarly honoured his services to the Royal Arch with the rank of P.A.G.D.C. in 1916.

He attended Emmanuel Church, Forest Gate, on the morning of Sunday 15th September 1929, where he read the lesson. Returning home, apparently in good health, he had lunch and was having his usual afternoon rest when he died in his sleep within a week of his 87th birthday.

At his internment at City of London Cemetery, the Doric, Woodgrange, Victoria Park, Byfield and Forest Gate Lodges were represented and sprigs of Acacia were dropped into the grave by the brethren.