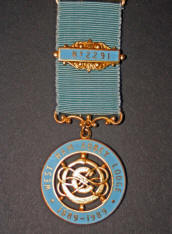 On Thursday the 20th April 1989, West Ham Abbey celebrated 100 years of Freemasonry. The meeting was held at Freemasons Hall, Great Queen Street, London. The celebration was greatly attended and a book called ‘West Ham Abbey Lodge, The First One Hundred Years’ was given to each of the brethren who attended. The book was compiled by W.Bro. George Bullen who painstakingly reviewed the minutes of the Lodge’s meetings over the first one hundred years.

The jewel shown here is the West Ham Abbey Centenary jewel. It was commissioned in celebration and recognition of the Lodge over the past century and was made available to the members of West Ham Abbey to buy and proudly adorn at each Lodge meeting. Contact the Lodge Secretary for more information if you would like to own one of the few remaining Centenary Jewels.