Friday the 20th of June 2014 was a memorable day for West Ham Abbey Lodge No.2291, as the brethren embarked on their very first charity golf day. After much deliberation in the bar before, during, and after their meetings at Ilford Conservative Club, the location was decided as The Burstead Golf Club, Essex.

Trophies for 1st, 2nd, 3rd place individual player, winning team, nearest the pin, and longest drive, were donated by W.Bro. Joe Hood, W.Bro. Bill Bones and W.Bro. Glen McDonald. Special thanks go to Bro. Steve Collins for donating the signed England rugby shirt as an auction prize. The day was well attended by members of the Lodge and Chapter as well as other masons and non-masons.

It was a lovely summer’s day with a variety of golf played, some good, some bad with one player striking the roof of the picturesque club house (pictured above), so hard with a stray ball that the people inside thought a terrorist attack was imminent! Following the golf, lunch was served with drinks flowing while the raffle and auction prizes were displayed. The golf prizes were presented to the winning players and team. On behalf of the Worshipful Master and the members we are pleased to confirm we managed to raise £3,000 for the proposed charities.

It was decided this will be distributed into two donations to St Luke’s hospice in Basildon (see below) W.Bro. Glen McDonald and his wife Dee presenting the cheque. 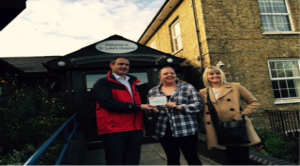 The second presented to St. Francis Hospice in Havering-atte-Bower by Bros. Steve Collins and Peter Sutton-Evans. (below)

Thanks to the support and subsequent success of the event, the members of West Ham Abbey Lodge are already looking forward to arranging the next golf day. This will be on or around the 19th of June 2015, with the proceeds going to the latest Metropolitan Grand Lodge appeal ‘Plasma Jet’, which is to assist in the fight against ovarian cancer at St. Barts Hospital. We hope to see as many of you there as possible, if you would like more details or would like to book a place please contact W.Bro. Glen McDonald.

This site uses Akismet to reduce spam. Learn how your comment data is processed.