2018-03-10 15:07:46
West Ham Abbey Lodge are delighted that our charitable donations have helped so many from our local community and beyond.
Read more... 0 comments

On the 19th May, one of our members travelled to New York to run the New York Half Marathon in aid of J-A-C-K (Joining Against Cancer in Kids). His target was a mere £350 until he mentioned it to the members of the Lodge! The Lodge sponsored him £250 and then a further £225 was collected by individual members at the Festive Board at our March meeting.

The day was always going to be a knock-out success. Trophies for 1st, 2nd, individual player, winning team, nearest the pin, and longest drive, were all donated by W.Bro. Joe Hood, prizes for the winners donated by W.Bro. Bill Bones and W.Bro. Glen McDonald. The day was finished off with dinner, a raffle and auction of signed football shirts from Pele, Maradona, Cristiano Ronaldo, and Lionel Messi. The day was well attended by members of the Lodge, guest masons and non masons alike.

With the support of all those that attended or sponsored the event, we are pleased to confirm that the Lodge managed to raise £11k for the Metropolitan Grand Lodge current London Air Ambulance appeal to raise £2m for a second air ambulance to serve the community of London. And here’s why we’re so keen to support such an amazing group of people… 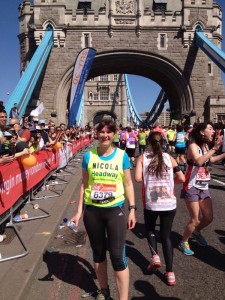 Nicola Field (wife of our ADC) ran the Virgin London Marathon in aid of Headway – The Brain Injury Association.

This was Nicola’s first attempt the marathon and she completed it in 5 hours 28 minutes. West Ham Abbey Lodge sponsored £500 towards her total which topped out at £1,850 plus gift aid!

West Ham Abbey Lodge pledged to support St. Francis Hospice in Essex over a three year period. We had several events including our annual Ladies’ Festival and various Lodge raffles to raise a tidy sum. But without doubt, the most notable contribution to the appeal was a charity skydive by Steve Collins. Steve raised over £2,000 on his own. When asked about his experience Steve said, “..it was good, but I won’t be doing it again!”  Check out Steve’s video below.

West Ham Abbey made big moves this Christmas in support of those needing all the help they can get! They included Caister Lifeboat, Add+Up, St. Francis Hospice and St. Josephs.

Caister Lifeboat and Add+Up received £500 each while St. Francis and St. Jospehs each shared the proceeds of the December raffle (£155) as has become the tradition.

In addidtion, it was agreed that St Francis’ Hospice would become the ‘figurehead’ charity for West Ham Abbey Lodge who have pledged to donate a minimum of six thousand pounds over the next three years. We hope that we can raise much more than that and ask your help in supporting this wonderful charity. 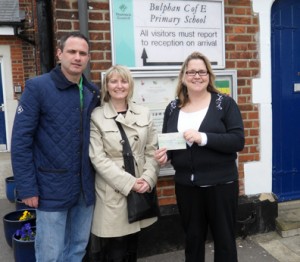 West Ham Abbey Lodge assisted Bulphan C of E Primary School with their refurbishments by handing over a cheque for £1,000 towards the fund.

Bulphan School is a small community Primary School in Essex. Like most primary schools, Bulphan’s funding is often only enough to make ends meet meaning that even the simplest of refurbishments are costly.

The donation will go towards providing a new library for the school.

West Ham Abbey Chapter was recognised as Vice Patron of the Metropolitan Masonic Charity after the Companions of the Chapter donated £1,000 towards the current Cyberknife Appeal.

The appeal which was launched in February 2010 and runs until February 2014 is to raise funds to provide a state of the art laser known as a Cyberknife to the St. Barts Hospital. The Cyberknife enables a less invasive treatment of cancers and treatment of previously inoperable tumours. The Cyberknife will cost £3million and will be entirely funded by London Masons for the benefit of all those people who are treated at St Barts.

The Companions of West Ham Abbey Chapter were so amazed at Team Laws’ intention to compete in the Big Cow Cowman 10 middle distance triathlon (1900m Swim/92k cycle/21k run) that they pledged a further £300 on the successful completion of the race.

Help for 2 Charities. First Step and the SSAFA

At the December meeting, West Ham Abbey Lodge agreed to send cheques to two charities whose hard work had been brought to their attention.

First Step provide support and learning to pre-school children with learning difficulties in Havering. They received £300 from the Lodge.

The Soldiers, Sailors, Airmen and Families Association (SSAFA) provide support for our current and ex-servicemen and women. They also received £300 from the Lodge.

Team Laws gets a boost from West Ham Abbey Chapter

Team Laws consists of Ben Laws – a Paramedic in London, and his son Ewan – lovingly nicknamed the ‘IronKid’. It is their challenge to complete a series of medium and full distance Triathlons together.

“So what?” I hear you ask. Triathlons are a feat in themselves without the added challenge that Ewan was born severely disabled with Cerebral Palsy and other physical and learning difficulties. Team Laws competes to raise money for three charities which are very close to their hearts. They are: Help for Heroes, SCAMPPS and MERU.
West Ham Abbey Chapter has donated £300 to be divided equally between these charities.

West Ham Abbey Lodge presented a cheque for £500 to Bro. Andrew Falkingham in support of his wife Elizabeth who is running this years London Marathon in aid of Leukaemia Research.

West Ham Abbey Lodge turned its attention to one of the masonic charities in February. The Lodge was honoured with W.Bro Robert Blick, Metropolitan Grand Inspector along with a retinue of dignitaries from Metropolitan Grand Lodge for the dedication of the Lodge’s new Banner (pictured on the home page).

W.Bro. Blick was delighted to be presented with a cheque for £1,000 in support of the RMBI.

West Ham Abbey Lodge paid a visit to one of their perennial non-masonic charities on Wednesday 9th January 2008 to present a cheque for £1,000 from the Master’s List for 2006/07. The Lodge was represented by W.Bro.Daniel Field. The cheque was presented to Community Fundraising Manager – Viv Talbot. Viv was kind enough to show us round the hospice giving us a guided tour of its facilities and highlighted the ethos and philosophy of those that work at and receive care from what really is one of the most humbling places one can visit.

The hospice provides care and support on so many levels for children with life limiting illnesses that the task seems massive.
The funds donated will contribute towards the £2.8million a year needed in order to provide this unique and essential service. Richard House has to date received over £34,000 from masonic Lodges this year. Long may that support continue. Visit www.richardhouse.org.uk